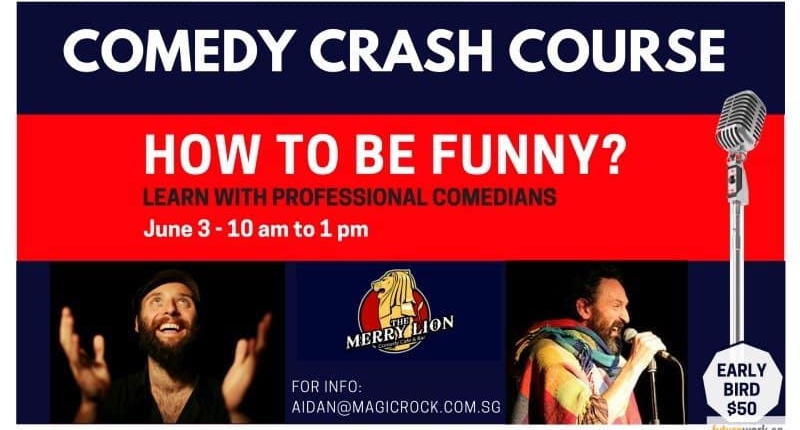 Presentation Skills Through Stand Up Comedy

GUEST POST by Aidan Killian – In 2007, I quit my job as a ‘derivatives specialist’ in Tokyo at Bear Stearns. I went from being an over-paid expat to start my new career as an under-paid comedian.

It started with the morning office meetings. I remember being called upon to speak out loud on behalf of my team and I used to blush and sweat even when I did know the answers. I hated this fear that came over me so I took action to work on it. I was not aware of any public-speaking courses in Tokyo but I ended up at a comedy club and noticed that these comics had really good communication skills. They were clear, looked confident and if they got a laugh at the end of a joke it meant that the entire audience had followed them. I signed up for my first gig.

One month later I was back at the comedy club with my first 3 minutes of comedy material that I wrote with help of my funny uncle. The build up to it was petrifying but once I was on stage it was incredible. The intense pleasure and joy of filling a room with laughter is better than heroin. Well I don’t know what heroin is like but the former is pretty damn addictive and so I started my new hobby.

Instantly, I lost most of my fear with public speaking at the office meeting and became visibly more confident in all areas of life. I could express myself out loud with such ease and eloquence that had evaded me previously. Talking about loud without the need of a punch line is so much easier than needing to make the audience laugh. 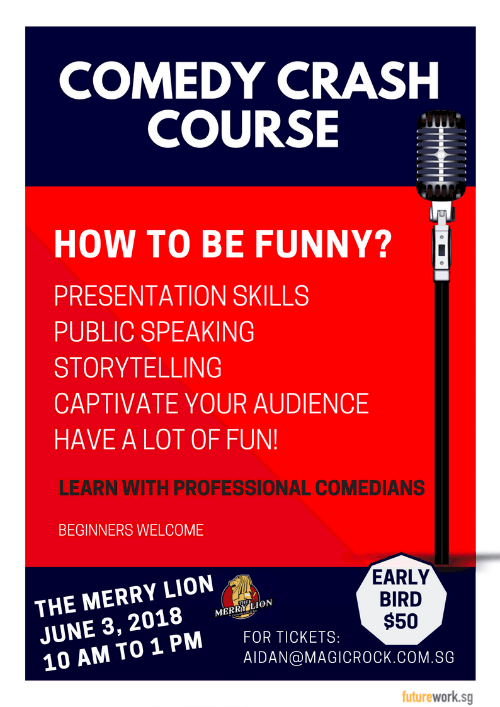 So what are some of the things I have learned that may help you?

The main reason comedians are often the best public-speakers in the world is because they get instant feedback from their audience. Either the audience laughs or they are silent (or worse). Thus, the comics can use this feedback to improve. We can remove or improve the bits that are not getting the desired reaction and expand the bits the audience like.

In general, a perfect jokes uses the least amount of words possible to get to the punchline. There is the ‘set up’ of the joke and the ‘punchline’ (the last words said before the laughter). The set up must be clear so we remove all unnecessary words and distractions so people follow the joke. If there is too much rambling or side tracking it is likely the audience will get distracted and not laugh at the punchline. Instead of laughter you will wallow in discomfort. This is useful at work, for all speeches and in life in general. Know what you want to say and get to the point. The clarity is refreshing for the listener.

Live in the silence. In between the set up and the punch line there is a space with no words. This is essential. Unfortunately many of us (even comics) speak words over this space which reduces the impact of the joke. This is an exciting  and beautiful space for the listener and can be also for the speaker once they learn to live in it / breathe in it. Without this space it is hard to allow the listener to think, to feel or to allow tension to build. Many reasons people do not allow this space is because they are worried about being cut-of, interrupted or heckled.

Everyone has stories. Every experience everyone ever has can be a story. Some people are born gifted storytellers and others have to make an effort to learn. The good news is that everybody can learn if they want to. A super simple story would be, beginning, middle and end or to give a little more away.

There are structures to jokes that can be learned, like for example, the ‘Rule of Three.’ The first point is the initial starting point. The second point confirms the theme. Two points define a line and a line creates direction. So if I said  ‘apples, banana…’ you would very quickly realise that there is a fruit theme so you may think ‘oranges.’ Now knowing that we can create direction means we can break it too and if we do this it becomes funny. This is why for every “Englishman, Irishman and Scotsman” joke the first two always do the same and the third one does the opposite or something completely different. Thus creating and the breaking direction = funny. (NOTE: These tools would be much easier to learn in person with practice using spoken examples).

For me, doing stand up comedy was the bungee-jump of self-improvement that changed my life in many ways. I recommend that everybody should challenge themselves to do it (at least) once. That does not mean everyone should quit their jobs but everyone should over-come the fear and explore telling their story, creating laughter and learning simple techniques on how to make people laugh.

There is a short taster course on How to Be Funny coming soon to Singapore on June 3rd from 10am – 1pm. You would be working with Aidan Killian (me) and the legendary comedian, Phil Kay. There are limited early bird tickets available for $50. More information is here. Feel free to contact Aidan at: aidan@magicrock.com.sg

Presentation Skills Through Stand Up Comedy